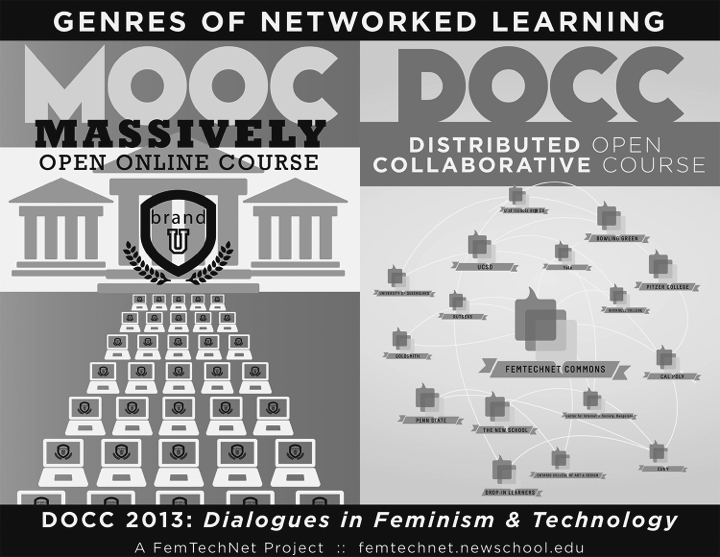 “It’s not just about studying and learning,” says Pitzer College student Susanna Ferrell. “It’s also about activism,” adds fellow student Jade Ulrich, both of whom were beta testers for a Distributed Open Collaborative Course (DOCC) about “Dialogues on Feminism and Technology” that started with Pitzer, University of California, San Diego, and Bowling Green State University students and spread to 18 colleges and a worldwide community of online learners. (Ferrell and Ulrich presented at the experiential learning conference in San Diego, January 2014.)

As Ms. Ulrich noted, participants in DOCC 2013 did not just view the texts and respond to keyword dialogues, blog, and collectively aggregate knowledge repositories — they also acted upon feminist principles by wikistorming — making sure (through active editing and authoring) that Wikipedia articles acknowledge technological accomplishments of women. Connected learning generally grows from an enthusiasm that springs from a personal interest in a topic, along with shared purpose among learners. When that shared interest and purpose is feminism, experiments in open, collaborative, networked learning can include activism, much in the way action research seeks ways to solve social problems.

MOOCs went through their hype and hype deflation cycles, and as understanding the differences between peer-communication-centric cMOOCs and knowledge-presentation-centric xMOOCs has spread, more people are beginning to think about a broad spectrum of open learning varieties and hybrids.

FemTechNet, “an activated network of scholars, artists, and students who work on, with, and at the borders of technology, science and feminism in a variety of fields including STS, Media and Visual Studies, Art, Women’s, Queer, and Ethnic studies” who “collaborate on the design and creation of projects of feminist technological innovation for the purposes of engaging the interest of colleagues and students on advanced topics in feminist science-technology studies” have been experimenting with a DOCC, derived from the cMOOCS pioneered by Dave Cormier, Stephen Downes, and George Siemens, in collaboration with learning institutions around the world:

The DOCC 2013 has been created as an alternative genre of MOOC, to demonstrate the innovative process of feminist thinking that engages issues of networked infrastructures for learning, learner-centered pedagogies, collaborative knowledge creation, and transformational practices of design and media making.

A MOOC (massive open online course) is typically organized and branded by a single (elite) institution. A DOCC recognizes and is built on the understanding that expertise is distributed throughout a network, among participants situated in diverse institutional contexts, within diverse material, geographic, and national settings, and who embody and perform diverse identities (as teachers, as students, as media-makers, as activists, as trainers, as members of various publics, for example).

DOCCs contribute several key innovations to the emerging body of knowledge about open online learning. In addition to the activist element, the DOCC that ran in September-December, 2013 included core content consisting of video panel discussions among thinkers and artists confronting questions organized around keywords, followed by online text discussions. DOCC 2013 provided an editable document with ideas for ways for DOCC courses in different settings to network and interact. While each course conducted in affiliation with an educational institution could shape its version of classroom and online dialogue, affordances for distributed collaboration were built into the course through a blog and a commentable video channel. In addition, like other open courses such as ds106, according to the FemTechNet whitepaper, DOCC 2013 “pays particular attention to classroom communication structures and practices, especially in highly mediated digital environments. Feminist pedagogy, therefore is not merely or only a set of practices for teaching women, but rather a pedagogical framework built on the analysis and exploration of visible and invisible modes of learning.”

Storming Wikipedia was designed as a “shared pedagogical activity” – engaging network participants in editing and revising Wikipedia pages in accordance with Wikipedia norms to correct the perceived imbalance in gender representation that stems from a male-skewed population of authors and editors, a hybrid of experiential learning and activism:

According to the wikistorming guidelines, “For the Fall of 2013, DOCC professors and students will work on the following five projects:

In addition to Wikipedia editing, the collective intelligence of the DOCC network was enlisted to “write and maintain a digital archive of feminist work in science, technology and media so that the histories of the future will be well populated by the ideas and people that took feminism seriously as a source of inspiration and innovation in the creation of new technocultures.”

Although DOCC 2013 was rooted in feminist pedagogy, the principles of that pedagogy that draw more attention to student voice in the course’s design, emphasize experiential and participative learning and enlist distributed collaboration that can be mobilized around topics other than feminist theory and activism. Activist branches and those that use DOCC principles without shared political ideology among participants should engender many forms of experimentation. A proliferation of different approaches makes for a more diverse and therefore evolutionary robust set of experiments – those methods, frameworks, tools and approaches that fit a learning need will evolve further.

In this video interview, I speak with Susanna Ferrell and Jade Ulrich about the origins and the future of FemTechNet.