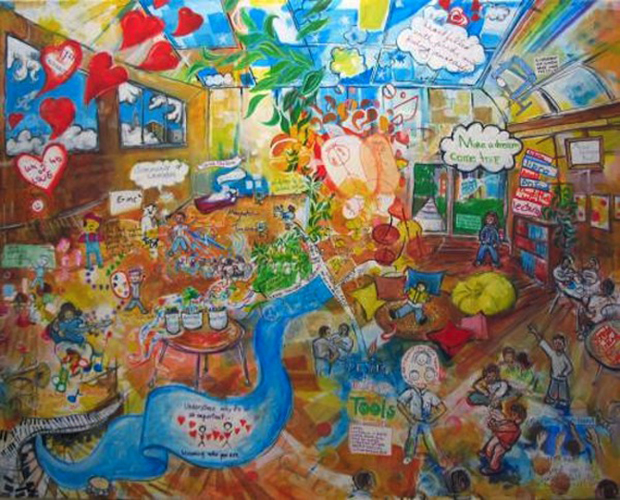 At my elementary school in Phoenix, Arizona, problem students like me were often sent to the art teacher’s room. Unfortunately for me, my objection to sitting in a little desk, arranged in rows with other little desks, then moving in single-file to another room full of desks in rows whenever a loud bell rang, made me a problem student. Fortunately for me, the art teacher was my mother, beloved by many as Mrs. Rheingold. After the pin-drop quiet, pin-neat order of our homerooms, the happy chaos of Mrs. Rheingold’s art studio was like travelling to an altogether different dimension. Mrs. Rheingold’s philosophy of teaching art was that all human beings are creative innovators who have a need to express themselves creatively and take joy in it, but many — most — people are shut down at an early age. Someone looks at the page you are happily scribbling and tells you that your horse doesn’t look like a horse, and you decide to leave art to specialists. Mrs. Rheingold didn’t teach technique. She gave permission to play. Thank you, mom. By now, art classes in US public schools are notions from a distant past. I was heartened when Sir Ken Robinson received world-wide attention for his TED talk, “Do Schools Kill Creativity?” With so much attention to core curriculum, the creativity-blunting effects of schooling have not been at the forefront of discussions about how to fix educational institutions. I was heartened again to see that my mother’s philosophy of teaching creativity through permission rather than technique is being advanced by some of today’s educators. Jackie Gerstein, for example.

I first became aware of Jackie when she posted regularly and incisively in the text chats that accompany the weekly Connected Learning Webcasts. When I Googled her, I found her post about Sir Ken Robinson’s uncomfortable question, which led me to Gerstein’s argument for the increasingly rare unstructured places and times for learning. I wasn’t surprised to learn that she was not only an early advocate for “the flipped classroom” but spent a year thinking in public on her blog about what you do with the physically co-present classroom when traditional lectures have been moved to YouTube. And I love that she applied the flipped classroom frame to tinkering and making — introducing me to the delicious term “maker education.” Cyberized as my life and work has become, I still find joy in making physical objects. Along with art class, one of the few classes in elementary school that I looked forward to was shop class, another notion from the past.

I welcomed the opportunity to talk with Jackie for the brief video below. One thing that video conveys that is hard to get across in text: the passion of the speaker for her calling. Among other things, I asked her about “passion-based learning,” an idea she picked up from Sheryl Nussbaum-Beach and extended to include “project-based” and “play-based” learning. Passion, projects, and play. Sounds like fun. In the hands of Mrs. Rheingold or Jackie Gerstein, it’s also about connecting with the deep joy humans experience in learning until we’re schooled out of it.