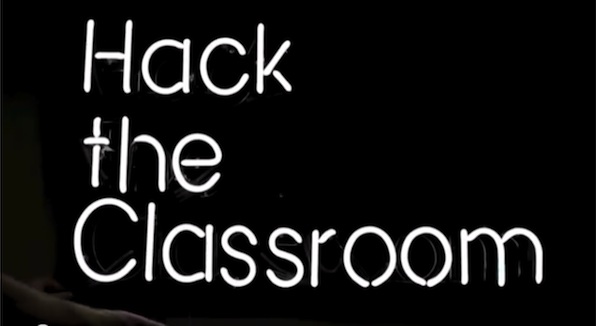 As soon as she joined one of my online courses and immediately embraced co-learning, I recognized Michelle Cordy as the kind of fearless learner who makes a great teacher. A teacher can do a great deal to facilitate the conditions from which learning communities emerge – but only the learners can make the real magic happen. In my ten years of teaching face to face and online, I’ve discovered that the sine qua non of the truly magical co-learning experience is a lead learner or two – people who will try the activities and read the texts I prescribe, then not only share their own learning with the group, but take an active lead in firing up co-learners and helping them join together into a cooperative community. Whenever a lead learner emerges, face to face or online, I know we have a good chance of acting not just as knowledge-acquiring individuals, but as a community of inquiry that makes sense of knowledge together.

When she applied for my online class, Cordy told me she taught third and fourth graders and was in the envious position of being able to provide iPads to each of her students. When I saw that Cordy’s blog is named Hack the Classroom, I knew I wanted to find out more.

Cordy was inspired to apply the older definition of  “hacking” as a way of devising ingenious solutions and overcoming obstacles when she read one of the foundational documents of the open source software world, Eric Raymond’s The Cathedral and the Bazaar: Musings on Linux and Open Source by an Accidental Revolutionary. “Raymond wrote that ‘too many programmers work on projects they neither need or want. Every good piece of work starts by scratching a personal itch.’ I know that we need to start hacking the obstacles that prevent today’s students from working on projects they need and want,” Cordy explained, when I asked her what first inspired her to hack her classroom.

“I don’t believe that humans can be completely described as homo economicus,” Cordy told me: “We’re also homo aestheticus. Our desire to make things special is fundamental to what makes us human.”

Like all teachers, Cordy weaves together those ideas she has found in her learning quests into syntheses she thinks are most useful to her day-to-day encounters with young students. In addition to Eric Raymond and Gabriella Coleman, author of Coding Freedom (Cordy made a video of her mindmapping of Coding Freedom), Cordy cites Ellen Dissanayake. In addition to arguing for homo aestheticus, Dissanayake taught Cordy “four words about making learning special that guide my life and my teaching: meaning, belonging, hands-on competence, and elaboration.” I asked for examples.

Cordy told me: “we all need to plug into a greater sense of meaning every day in our classrooms. We all want to be part of something bigger and more important than ourselves. Like many teachers, we use token economies or reward systems. Students earn tokens and at the end of the week can use them to purchase items from our class ‘store.’ I taught my students about my own rule of three: Spend some, save some, give some. Students could spend on whatever they wanted for themselves and were also encouraged to save up for a larger item or to give money to a cause. I collect donations, and at the end of the month we decide as a group who to give money to.”

The importance of belonging was acutely felt by Cordy’s class when one of the students, Kendra, spent much of the year hospitalized for cancer treatment. “What Kendra wanted more than anything else was to belong to our hacking the classroom community. So we asked ourselves how we could help promote Kendra’s sense of belonging. We kept a stuffy on her desk each day to remind us that she was in our class even when she was in treatment. My kids Skyped with Kendra regularly while she was in the hospital.”

Like Dewey, Montessori, and other educators, Cordy believes hands-on competency is essential: “Kids want to build stuff. They want to make stuff. They want to take something home that is not a piece of paper. They can’t survive and thrive in a space where they are asked to think about things conceptually without holding some of those things in their hands and working directly and concretely with big ideas. It’s hard to make school real because it’s an environment that is pretty closed off from the world. So, you can engage students in creating physical representations even if they are only analogies to the real thing. Technology is great, but I think for children there must be a balance of physical making that works on their fine and gross motor skills. Even more than that, hand-making makes them feel powerful and in charge of something, no matter how small.”

Elaboration is about what Cordy calls “making things special” and individualizing, making the thing or learning into one’s own, turning it into something that reflects who you are as a human being as opposed to, what Cordy calls, “decoration.” “’Life of a Project’ is the name of a chart that students and I put together and that hangs in our classroom. It helps remind students that when you take on something special, you will have an emotional dip.

At the bottom of that emotional dip is where kids meet the ‘boring monster.’ We talk about how the boring monster makes kids want to socialize and be off task, makes them cranky. It is also where kids decorate. I talk to students about how decorating is often a sign that you have fallen off the project goals. I push students to try and work to make some thing that is different, that nobody else in the class would come up with. I try to encourage students to make their work stand out and be full of their own voice and personality.”

Technology does play a big role in Cordy’s classroom: “I was able to go 1:1 with iPad devices which I think was massive in changing how I think about empowering students to create more of their own learning. With their multimedia creation capabilities, the iPads proved a useful tool for kids to create ePortoflios of their work. They create videos to explain what they’ve learned (Another one). I create a lab book with all science experiments and students complete them as they go along with video and audio annotations (An ePub version of the Light Lab Book with full multimedia). I am working to figure out ways to get that work online in ways that respects parents’ and students’ preferences for living publicly or privately. My kids each have a powerful Internet enabled device that allows them to do powerful video and audio recordings and multimedia creations. Holy cow!”

Cordy also hacks the classroom’s physical space: “Classrooms often have an absence of soft spaces and private spaces. I think this impedes young learners from really getting into a flow. So, I have created large dividers full of sound insulating acoustic foam to create quiet corners. These ‘sound gobos’ as we call them are great for working and for sound recording on our iPads. I have a huge white curtain that forms part of a light studio for shooting video but also creates a private ‘hallway’ type space in the class. There is about 3 feet of space behind the white screen (sometimes a green screen) where kids love to take their coats and backpacks down off the hooks and make cozy little nests. Students can work where they want: desk, sitting, standing, carpet meeting space, work tables, sound gobos. This is a pretty DIY approach to rethinking the space for learning and being comfortable. I do have some convex mirrors, like the ones in convenience stores, above the gobos so I can supervise, but they still have a bit more privacy than a traditional classroom space.”

View Cordy in my video interview and you’ll see how she radiates enthusiasm for the learning potential of her students. We need more like her!

Hacking The Classroom with Michelle Cordy, aka, “Teacher on an Urgent Quest” from Connected Learning Alliance on Vimeo.